Karen Hines is shortlisted for the
20th Annual Siminovitch Prize in Theatre.

Five playwrights have been shortlisted for the 2020 Siminovitch Prize in Theatre, the $100,000 Canadian theatre award that is celebrating its 20th anniversary this year, writes Kelly Nestruck of the Globe & Mail. Other finalists are Carmen Aguirre, Tara Beagan, Martin Bellemare, and Annick Lefebvre.

Karen Hines’s genre-defying dark comedies have traveled the globe, winning her a loyal following and international critical acclaim. From Dawson to Boston, Calgary to Kuala Lumpur, Hines’ keen musings on modern life have charmed and horrified her audiences and cemented her reputation as “one of the gems of Canadian theatre.” (Toronto Star)

“I laughed. I cried. I called my friends.” (Minneapolis-St. Paul
Pioneer Press) 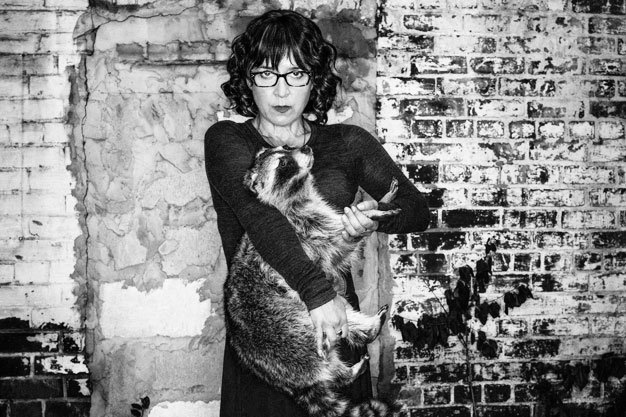 Hines as “the homeowner” in Crawlspace. Photo by Gary Mulcahey.

“One of the most original artists in the city.”

Pochsy Productions was founded in 1992 for the company’s first show, Pochsy’s Lips. Since then the company has developed seven more shows: Oh, baby, Hello…Hello, Citizen Pochsy, Pochsy Unplugged, Drama: Pilot Episode, Crawlspace, and All the Little Animals I Have Eaten as well as developing other works for stage and screen such as A Tax on Pochsy (The Audit), My Name is Pochsy: An Industrial Film and some new commissions currently in development.

All of Hines’ seven full-length plays are published by Coach House Books.

Combining such disparate elements as magical realism, satire and horror, Hines’ work has won a growing audience, numerous production and literary nominations and awards, as well as a reputation for original, hilarious and provocative entertainments.

“Pochsy is part of the light that keeps us laughing as we plunge into the darkness … Beckett would have fallen for her.” (Simon Houpt – Eye, Toronto).

AWARDS AND CITATIONS STAGE AND SCREEN: