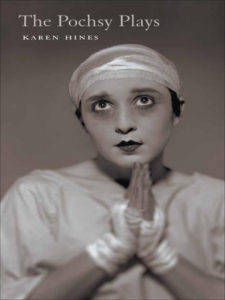 Beckett meets Betty Boop in this trilogy of monologues by Canadian cult heroine Pochsy. In The Pochsy Plays, Hines remodels and melds traditions like stand-up, absurdism, clowning and neo-cabaret to create some of the most original and cutting satire to hit the stage - and, now, the page. Pochsy garbles ad slogans, self-help mantras and desperate grabs at meaning into a postmodern pastiche that is hilarious and harrowing, sweet and bitter at the same time. With extensive photos, musical scores by Greg Morrison, the collaboration of director Sandra Bacovskeand an introduction by Darren O'Donnell.

'This beautifully produced collection is a valuable record of Hines's work ... The Pochsy Plays is a welcome record of a unique creation that should also allow this cult figure to become more widely known.'
– Letters in Canada

'Whether she's sending up loneliness and love or shallow ambition and greed, Hines's satire is dead-on ... Along with Hines's illuminating, intelligent introduction to the character and her style, photos and performance stills provide readers a fair sense of Pochsy's stage effect.'
– Border Crossing

Pochsy is a startling and original character: smart, bitter, hopeful, savage – and terribly funny. Hines has created a weirdly familiar world where the hurt arrives a single heartbeat after the joke."
– From the GG Nominations Page

More on The Pochsy Plays