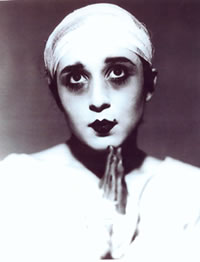 "A miracle of bitter hope... Hines has tapped into the confusion and alienation unique to our age and mined a work of gossamer charm and deadly power." – Simon Houpt, Eye, Toronto

Pochsy Productions was founded in 1992 for the company's first show, Pochsy's Lips, which won a loyal cult following, and went on to play theatres and festivals across Canada, the U.S.A. and Germany. Since then, the company has developed and produced seven more shows featuring casts large and small (see Production History).

The plays and several short films penned by Hines have earned Hines and her collaborators a reputation for provocative, original and hilarious offerings for the stage and screen.

"Hilarious and harrowing ... her comedy has the rare ability to make you laugh while feeling queasy ... [Pochsy is] the perfect clown creation for our time. (NOW)